Question:   What three things do Indiana Jones and the Revelation Movie have in common?

It is in fact the last one, Petra, that has the CPUs of our 3D graphics render farm cranking overtime, as we at Royal Crown Productions prepare the polishing touches on the Revelation teaser trailer, to be released to the world on November 1st.

The setup:   Revelation Chapter 12, which depicts a woman in heaven, "...clothed with the sun, and the moon under her feet, and upon her head a crown of twelve stars".

Some say she represents  the nation of Israel, others say the church....   (you'll have to wait until January of 2014 to get our take on it, syllabus to be posted soon!).

She is  confronted in a most terrifying manner by a great red, seven headed dragon -  none other than the devil himself.  The woman flees to the wilderness, where she is taken care of for three and a half years.

The dragon is cast out of heaven and goes to pursue the woman and attempts to overtake her in the wilderness, but..... 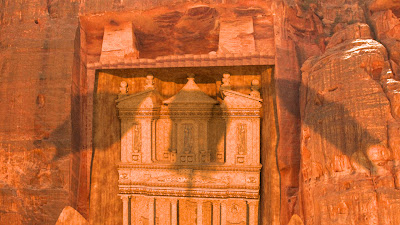 Oh yeah, we don't get into the rest of the story until January of 2014.  Nevertheless, you sure will get a sneak peek in our upcoming trailer, because how could we resist but include a scene of Petra?

Petra in Jordan is a fascinating ancient Nabatean city, built into the sides of cliff faces and hidden gorges.  Many Bible scholars speculate that the wilderness the woman is supposed to flee to is, in fact, Petra.  Whether or not that is the case, is a subject for our study later on.  But either way,  it makes for great cinematics, and thus we render away.

The scene?    We will swoop in on Petra from the air, the dragon's point of view.  Lit from behind by a late afternoon sun, his shadow casts a pall over the rock face as he swoops in towards a fleeing woman, ready for the kill......

If it reminds you a bit of Sigourney Weaver fleeing the Alien, you get our drift.  Epic motion pictures deserve epic creature-chasing-women scenes.

Come be a part of the action!  Stop by www.revelationmovie.org, bring your family, friends, a Bible, a notepad, and lots and lots of popcorn.
Posted by Unknown at 8:39 PM No comments:

Why Study Revelation? Better Yet... Why Not?


The book of Revelation has held a special fascination for me, from the time that I first read it in high school.   I would try to imagine the amazing visions that John described.  The artist in me always wished I could somehow capture the vision on canvas.  The spiritual seeker in me sought meaning behind the images.

I found the symbols and events depicted to be both enthralling and terrifying, and very difficult to comprehend and wrap my mind around.  It seemed so rich in information, but so intense, and I found that whatever I read on the subject, people had many different ideas and opinions on how it should be interpreted.  But it was in fact, through a rigorous study of Revelation, Daniel, and other prophetic works, in addition to several read-throughs of the Bible as a whole, that I eventually got enough of a handle to get what I believe to be "the big picture", and it led me to becoming a believer myself.

Bringing Technology to the Vision

Fifteen years ago I created a series of multimedia Bible study CD-ROMs, with the study on Revelation being the flagship product.  Now, I am preparing to launch a grander project, with a full motion movie in conjunction with an in-depth, video based online Bible study of Revelation, bringing to the body of Christ what perhaps will be one of the most comprehensive and immersive study of Revelation ever produced (www.revelationmovie.org).

Many people are excited about the project and I have received great feedback, but one thing is becoming very clear to me, is that the body of believers, as a whole, is very lacking in the area of a clear understanding and experience of the book of Revelation.  A large percentage of pastors don't even attempt to teach on the subject, and the average lay person is confused amidst a mass of conflicting, and often misleading information.

Since I myself believe Revelation to be one of the grandest and most important books of the Bible, I found it fascinating to learn this, and I began to explore the reasons people avoid Revelation.

Now that we have addressed  the common reasons why people avoid Revelation... it is time to discuss why every Christian  should make the study of Revelation a priority in their daily walk.

Why should people study Revelation?

And what if you are not a believer?  If you have an interest in the fascinating symbols and events depicted in the book of Revelation, but do not have a personal connection with the Messiah that is the focus of the book, and do not consider yourself a Christian?  Can a study of this book have any meaning for you?

Let me simply answer that by reminding the reader that I myself had a fascination with the book of Revelation from the time I was in high school, back before I was a believer.

Within a few years, I "joined the flock".